Some will say the Singapore Grand Prix kicked off and ended in dramatic fashion, but the mid-part was a little dull. For those interested in strategy, that’s far from the case.

The Marina Bay Street Circuit hosted a fascinating race, with Nico Rosberg just holding off Daniel Ricciardo to take the win and snatch back the top spot in the drivers’ standings. Lewis Hamilton rounded out the podium after beating Kimi Raikkonen.

Singapore saw a whole host of great drives up and down the field, including Sebastian Vettel’s charge from last to fifth and Kevin Magnussen snatching a point with 10th. We saw a diverse range of strategies used during the race, here were the main headlines.

Red Bull was the only team to do something different and take a risk in Q2, with both Daniel Ricciardo and Max Verstappen setting their best time on the super-soft tyre. They made it through to Q3, meaning they were the only drivers in the top 10 to start on the red-marked Pirelli tyre.

It showed how confident Red Bull felt at the Marina Bay track, with the RB12 being well-suited to the layout. It’s hard to really tell just how much of an advantage it gave them, but the gap between the super-softs and ultra-softs wasn’t massive and it helped both drivers be in better shape at the end of the opening stints.

Ferrari opted for quite an aggressive strategy with Vettel to help him move up the field from last on the grid after a problem in qualifying. The German driver started on the softs for a long first stint, helping him pick off the stragglers, before two shorter ultra-soft stints to aggressively weave up the order.

It worked well and was one of the alternative strategies in the race. Red Bull went for a super-soft/super-soft to kick off the race, which helped him to eke out an advantage over the chasing Hamilton. The Mercedes driver felt the soft tyre was the wrong call and it caused him to lose touch of the RBR car.

Once again we saw a Force India going for several long stints on the soft tyre. Sergio Perez opted for two long segments on the yellow-marked Pirelli compound, having ditched the ultra-soft for the early safety car (ironically caused by his team-mate Nico Hulkenberg). It saw him make steady progress up to eighth and was effectively a two-stop, as the safety car stop was pretty much free. 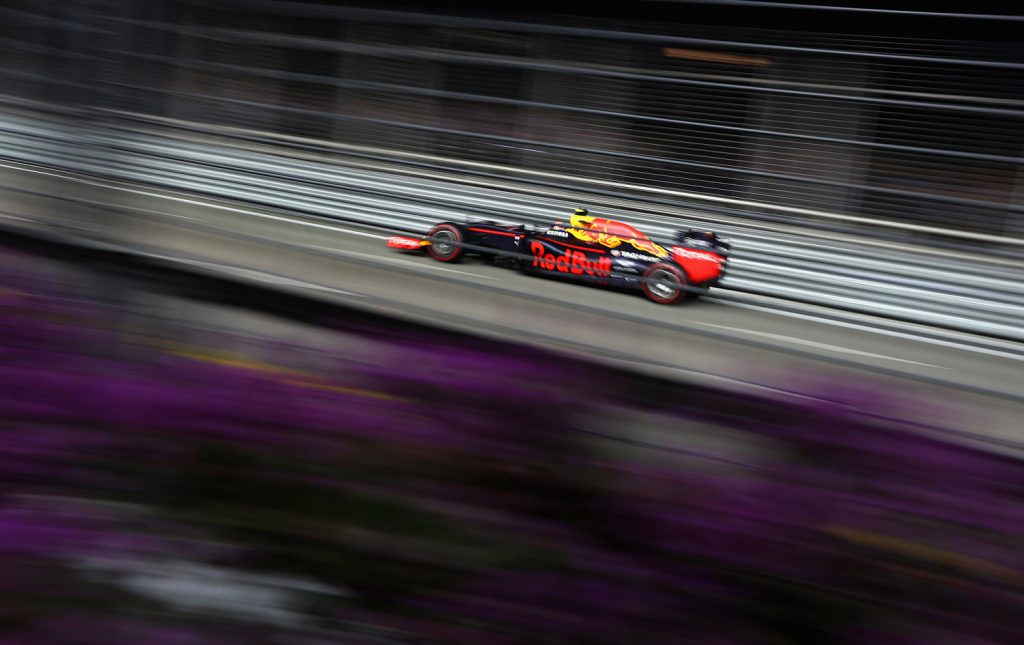 Mercedes turned the race on its head when it pitted Hamilton on lap 45 to try and get back ahead of Kimi Raikkonen’s Ferrari. Stopping one lap earlier and with fresh super-softs helped him move ahead of the Iceman, with Ferrari reacting to put Raikkonen on the ultra-softs.

This didn’t look like a particularly great call. He did close in on Hamilton towards the end of the race but struggled to close the gap early in the stint and this harmed his challenge. Red Bull then seemingly reacted by pitting Ricciardo, maybe feeling threatened by the pace of the Mercedes and Ferrari cars.

It looks like that’s what happened, anyway. Ricciardo could’ve gone to the end on the softs but that would’ve put his second place under threat from the closing Hamilton and Raikkonen. In the end it saw him quickly cut the gap to Rosberg, who did stay out. But he just ran out of time on his super-softs. It proved to be an awesome finish to the race though.

Daniil Kvyat looked in good form in Singapore and even said Toro Rosso was too conservative on their strategy, which saw him pit for ultra-softs on lap 15 and then go for two super-soft stints, switching tyres on lap 37. He felt possibly challenging Fernando Alonso for seventh was on the cards if they’d been a bit more aggressive, maybe following McLaren with an earlier second stint and move to the softs. The car looked quick so it could’ve been possible.

As always in Singapore, the undercut worked well with the warm track conditions and gap between the tyre compounds, coupled with the step up in tyre nominations. We saw several times that pitting earlier worked a treat, particularly with Hamilton and Raikkonen.

Ricciardo also stopped one lap before Rosberg and this put him closer to the Mercedes, but the Red Bull driver was on the medium-nominated tyre. He could’ve stayed out a few laps longer and then elongated his middle stint, to give him fresher softs for a final drive to the flag on the same compound as Rosberg – this could’ve worked better. But again, Red Bull had to react to those behind them in this case and it almost paid off. 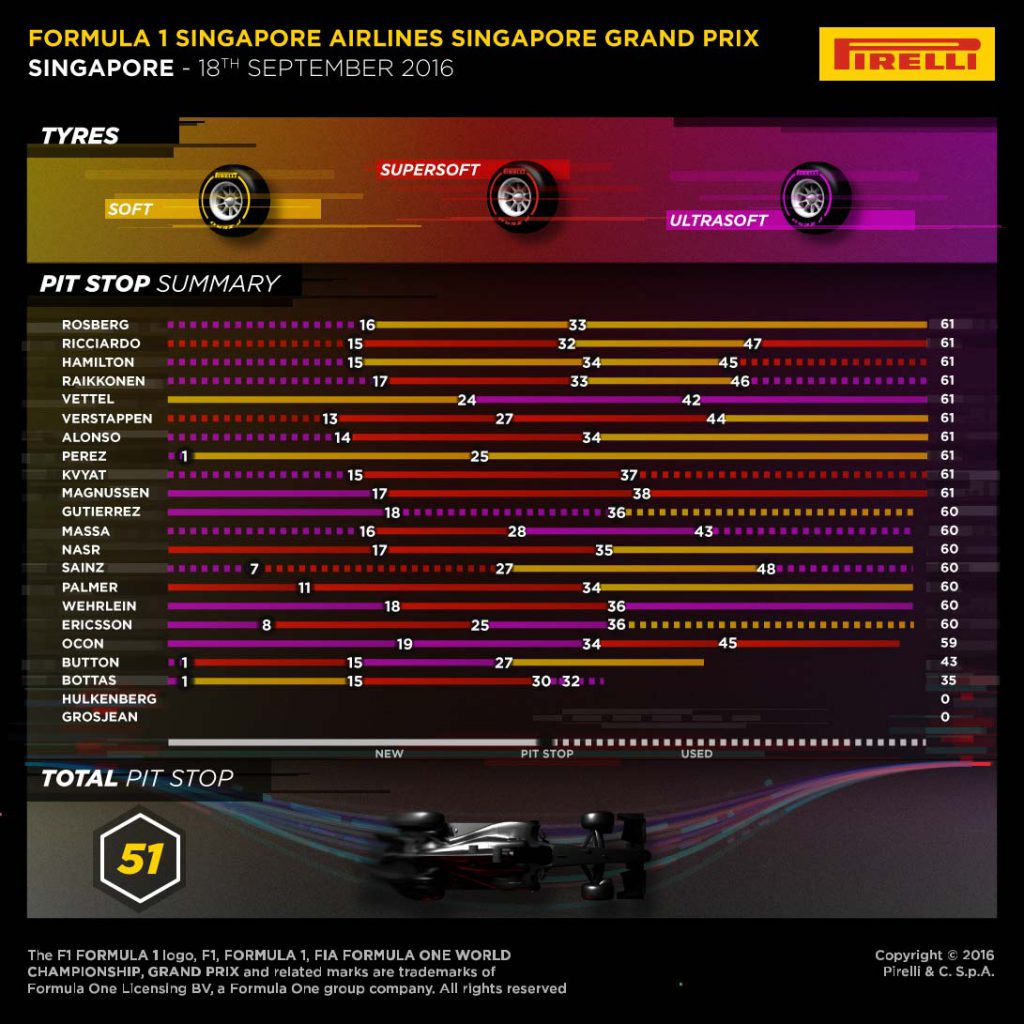 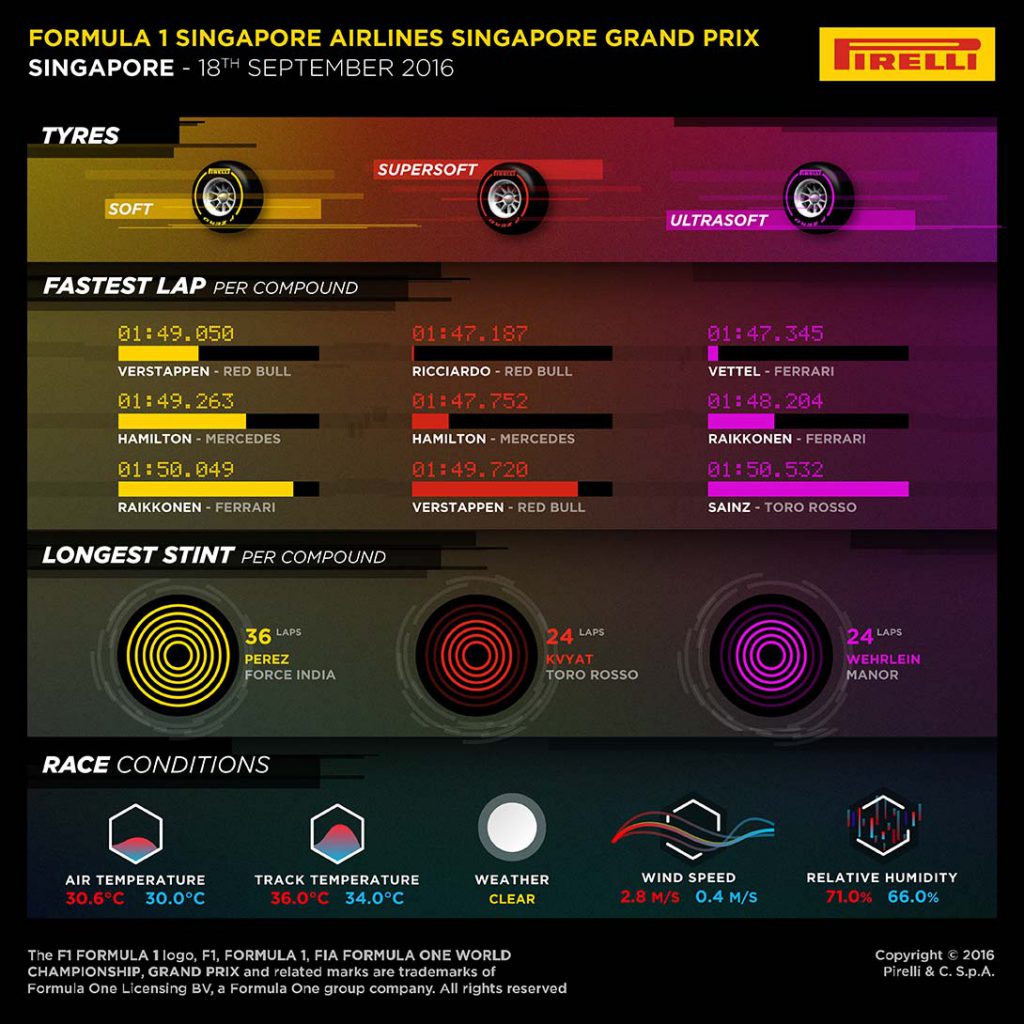 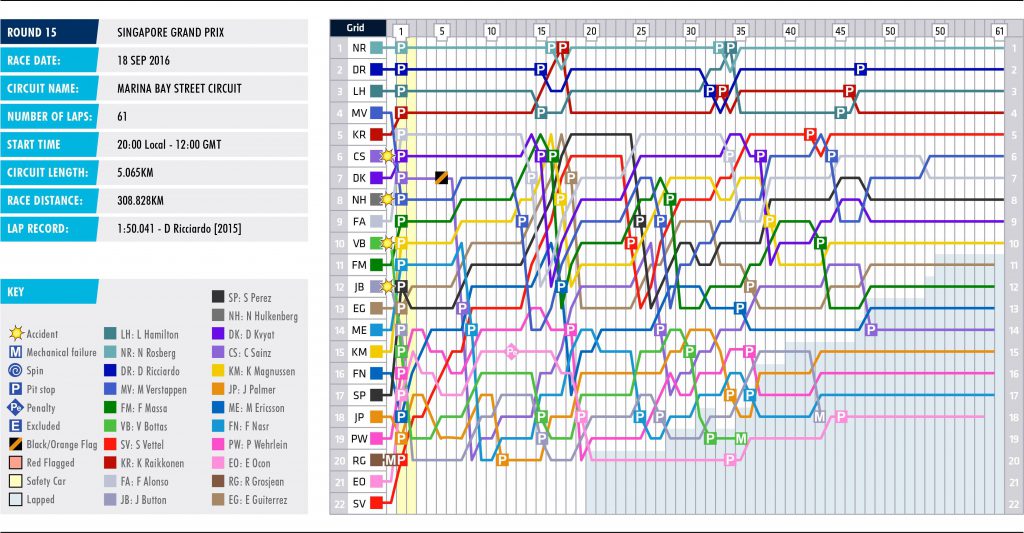