Valtteri Bottas should have won the Azerbaijan Grand Prix after executing a flawless weekend and pulling off a bold strategic gamble on the timing of his sole pit stop, but an errant bit of debris on the front straight undid his good work, causing a puncture so sudden and severe that he was forced to retire from the race altogether.

Instead Lewis Hamilton inherited victory on a day even the Briton admitted he wasn’t the best driver on the track, such is the unpredictable nature of the Baku City Circuit.

The Azerbaijan Grand Prix has shifted from its previous June calendar slot to the end of April, with a side-effect being substantially cooler weather and, at least on this weekend, far windier conditions.

The dusty, slippery circuit was made treacherous by peak gusts of up to 80 kilometres per hour on race day, and the alignment of the buildings meant the direction of the breeze was subject to sudden and surprising change.

Baku’s long front straight, low-degradation surface and lack of high-energy corners means tyre warm-up has always been difficult, but the cold weather made it even more so this year, with even the ultrasoft tyre, the compound with the lowest operating range of the selection brought to Azerbaijan experiencing graining due to lack of temperature.

Adding to the difficult was that the current soft tyre compound had ever appeared at this track in the past, meaning teams and drivers had their work cut out for them to master the circuit in time for the race. 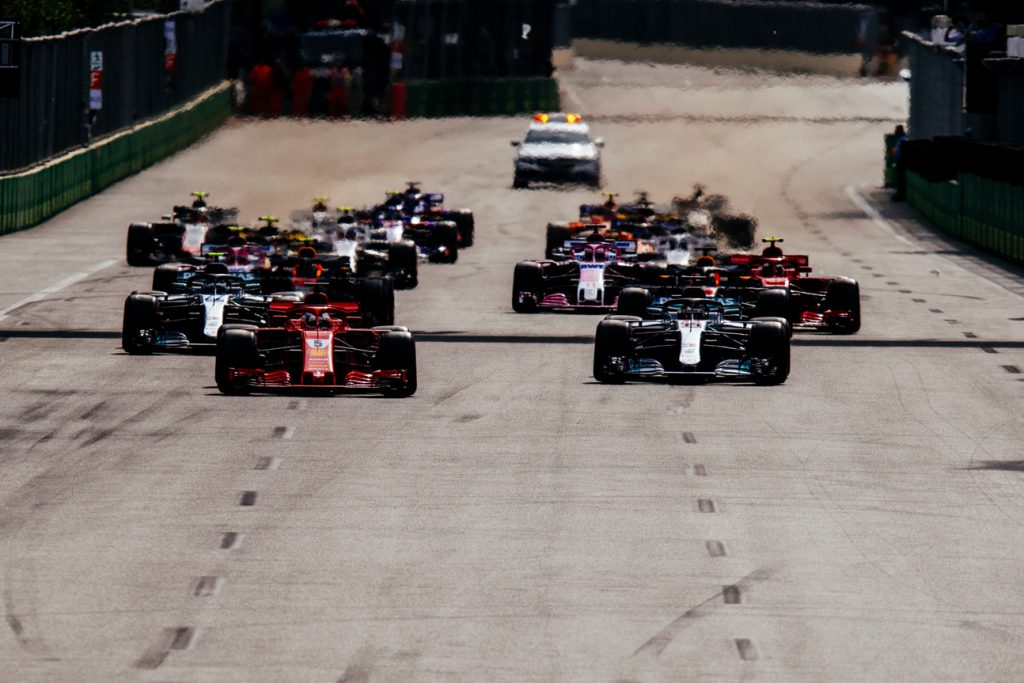 The ultrasoft was quickly judged to be a poor race tyre, so Mercedes, Ferrari and Red Bull Racing attempted to qualify for Q3 with the supersoft, with only Kimi Raikkonen unable to do so.

Both Force India and both Renault drivers likewise started on ultrasofts in the top 10, with all other bottom-10 cars starting on the supersoft compound bar Brendon Hartley and Romain Grosjean, who started on softs.

Lewis Hamilton struggled to extend the life of his first set of tyres and was forced to change to new softs on lap 22, leaving Sebastian Vettel and Valtteri Bottas out in an unusual duel — the supersofts were lasting longer than expected, and both were considering extending long enough to switch to the faster ultrasoft tyre for a short stint at the end of the race.

Vettel blinked first, however, stopping on lap 30 and leaving Bottas in the lead of the race, and when Mercedes saw Bottas could still set competitive time, it left him out and gambled on the likelihood of a safety car winning him a free pit stop, from which he could emerge with his lead intact.

But Vettel too took a new set of tyres — as did the rest of the field — and attempted to reclaim the lead at the first turn on the restart. He locked up and ran wide, dropping to fourth.

The win should’ve been Bottas’s, but debris on the front straight punctured his rear-left tyre one lap later, sending him out of the race. 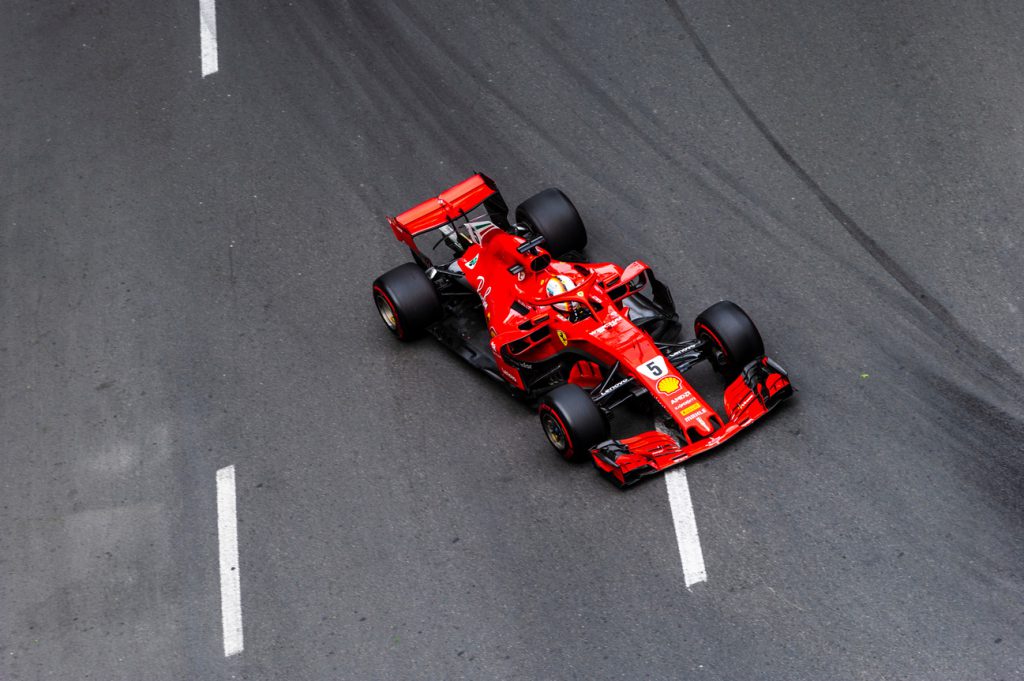 A RACE OF MANAGEMENT (AND NOT CRASHING)

Kimi Raikkonen and Sergio Perez drove strong races to second and third and were testament to the Azerbaijan Grand Prix virtue of keeping your head down while the rest of the field crumbles.

Both drivers were hit with damage in first-lap melees but both recovered with long middle stints on the soft tyre, passing drivers as they stopped later in the race.

Charles Leclerc too drove a clean race to claim his debut F1 points, moving from 13th on the grid to sixth at the flag with Pirelli’s convention one-stop strategy, though he added an extra stop behind the second safety car. 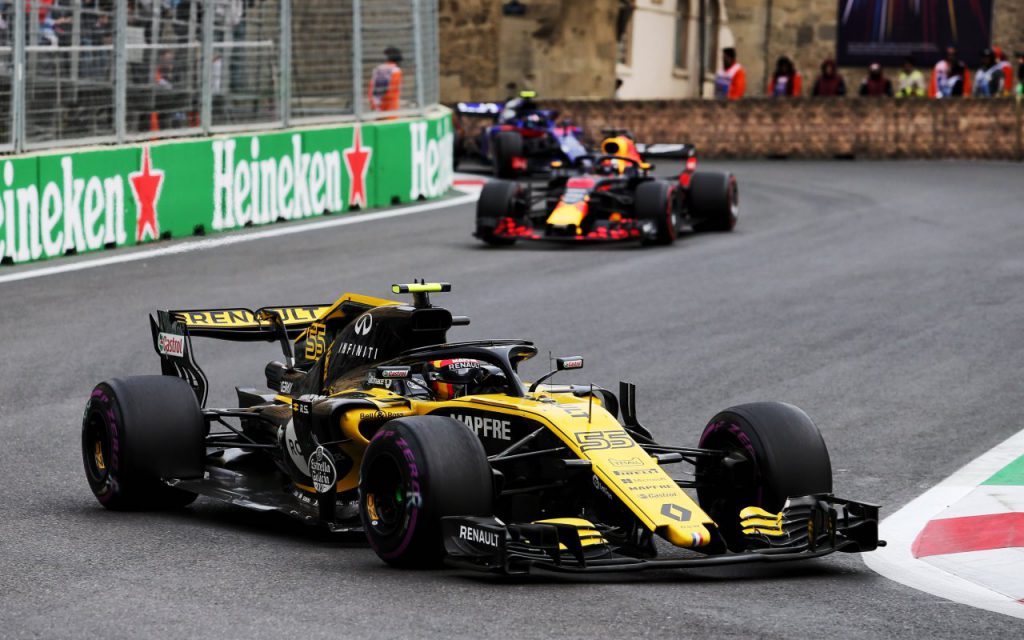 DID RENAULT MISS ITS COMEBACK PODIUM?

Carlos Sainz finished fifth for Renault’s best result since its F1 return as a constructor, but Sergio Perez serves as an interesting case study for what could have been.

Sainz was ahead of Perez when the Mexican was forced to pit with damage behind the lap-one safety car, but Force India’s long middle stint on the soft through to the second safety car proved one of the fastest race strategies, allowing the driver to bypass the messy mid-race pit stops of the rest of the midfield.

Fernando Alonso, who finished seventh after dropping to second last with damage on lap two, used the same strategy to great effect in a heavily damaged car, as did Romain Grosjean — see below — who harried Perez for much of the race.

Renault couldn’t have known it at the time, but a podium chance could’ve been on the cards. 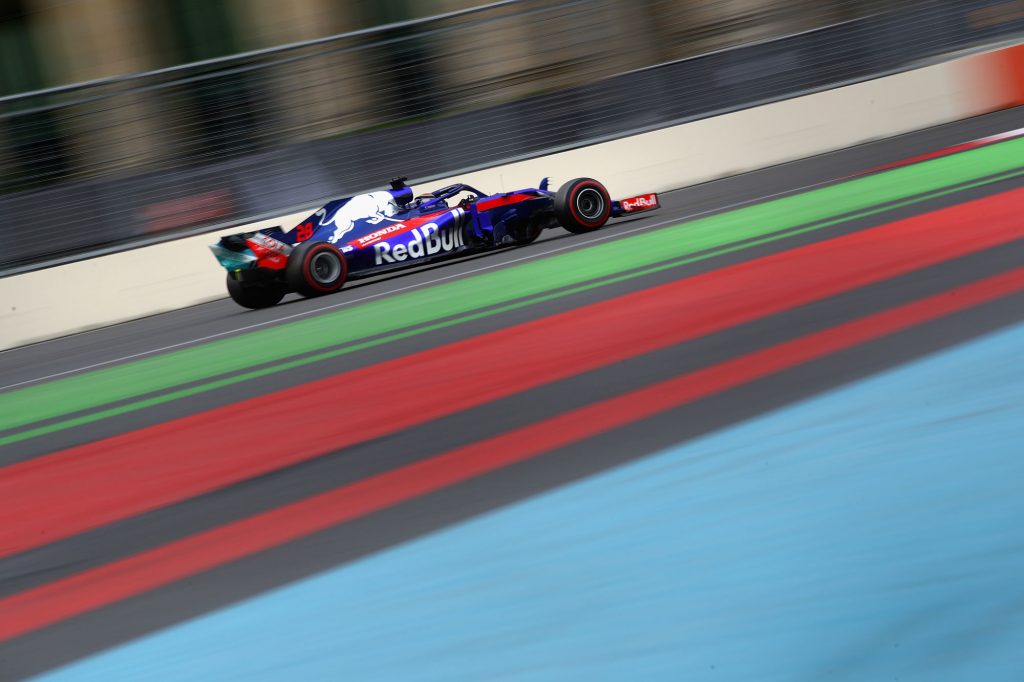 Romain Grosjean could also have made himself a 2018 podium-getter, having trailed Perez by only a few seconds in the middle part of the race on the same strategy, but the Frenchman’s grand prix ended with an embarrassing crash behind the safety car, capping off a difficult weekend for the Haas driver.

It left Haas with no points after Kevin Magnussen tangled with Pierre Gasly at the second safety car restart despite having a contender for fourth-fastest car.

Grosjean’s crash is attributable to the difficulty drivers had warming up their tyres on the particular circuit layout and in the cool conditions, and the task was made doubly difficult at the reduced speed behind the safety car.

Stoffel Vandoorne, however, found an ingenious solution around the problem — the Belgian made a pit stop on the lap before the restart, which meant the tyres he had on the first racing lap would have just come out of their blankets and have been at a reasonable working temperature.

It had the double benefit of dropping him behind the field and allowing him to complete that last caution lap at a higher speed while catching up, allowing him to keep the temperatures high. He made up five positions in four laps to end his race in the points.

Though he didn’t stop behind the safety car, he gained three positions from the Verstappen-Vettel crash: one each from the belligerents and another from Hamilton, who had to leave the track to avoid becoming collateral damage, all of which came about as a consequence of Red Bull Racing topping its drivers for fresh tyres. 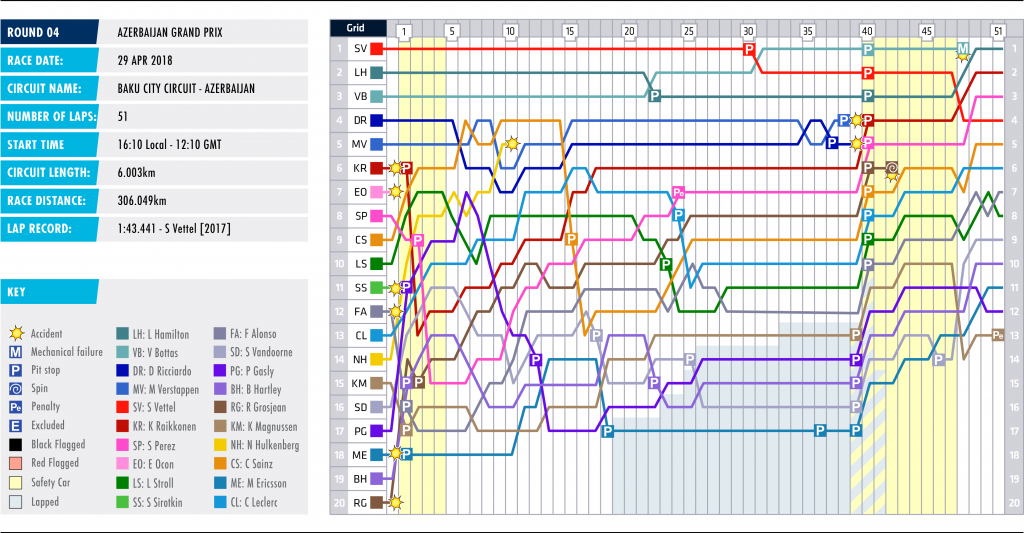 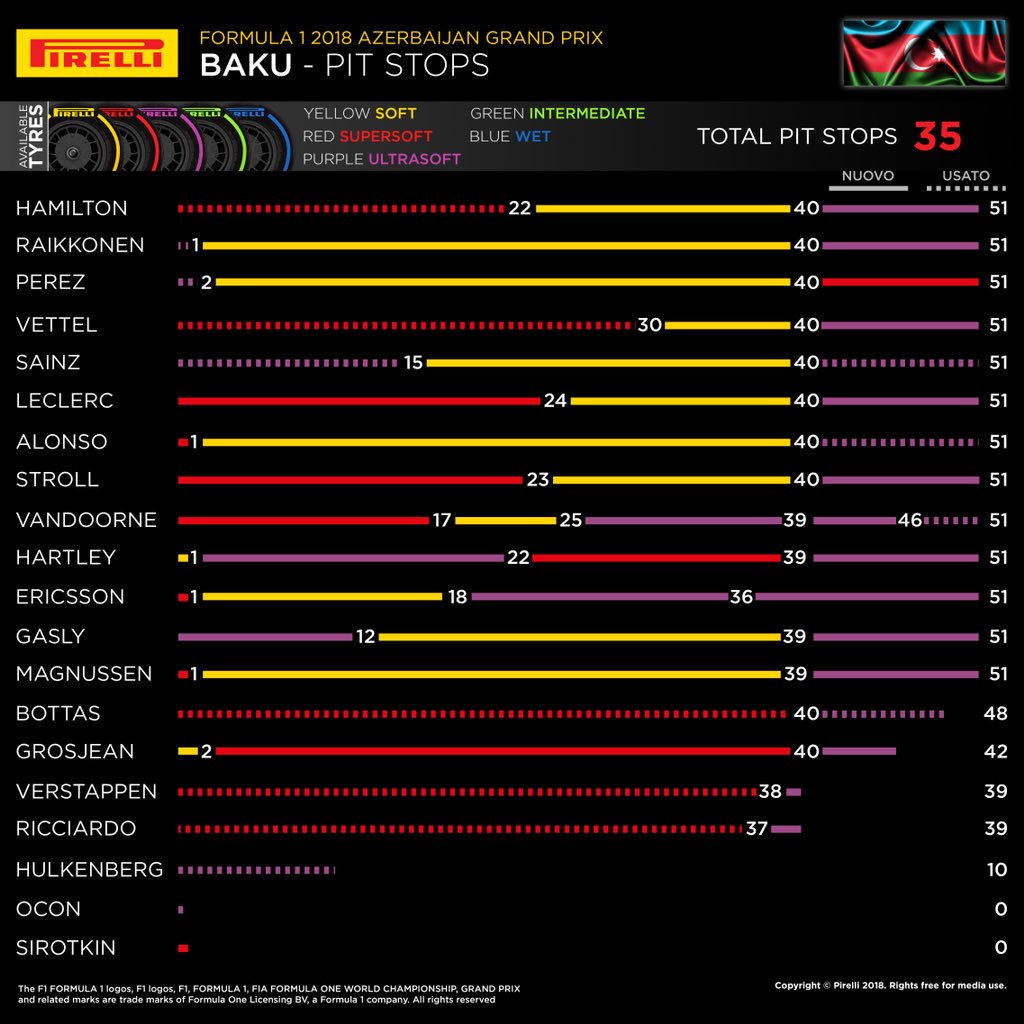 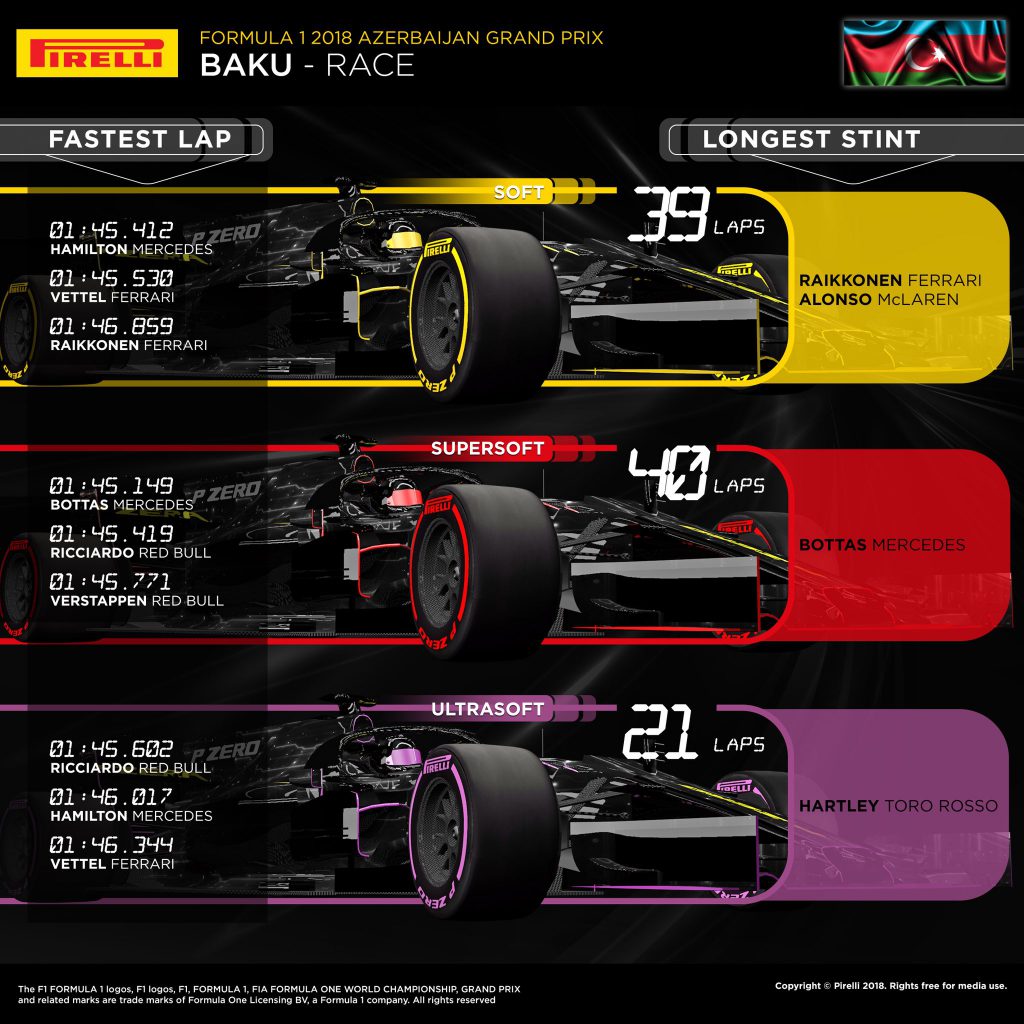