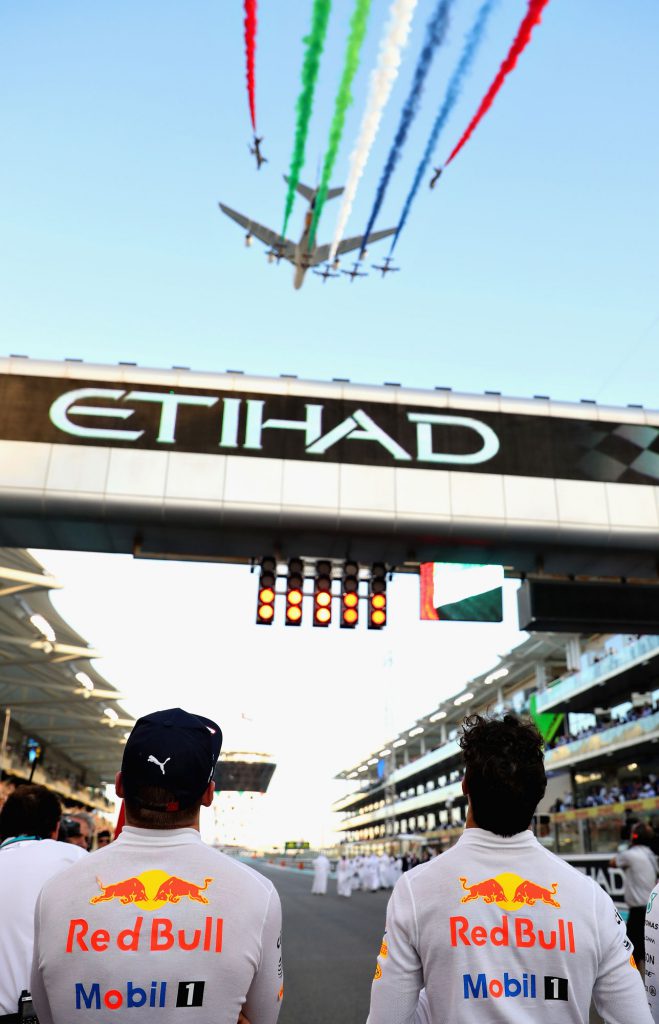 The 2017 Abu Dhabi Grand Prix was no classic, but the kind of sedate affair witnesses at the weekend has fast become synonymous with the Yas Marina Circuit.

The setting is undoubtedly spectacular, giving Formula One a stunning vista against which to set its nominal season climax, but the track layout in terms of both its profile and its low-degradation personality lends races little in the way of drama.

Indeed the top 10 finishers — with the exception of Fernando Alonso and Felipe Massa, who swapped places on-track, and Daniel Ricciardo, who retired with hydraulic issues — took the chequered flag in grid order despite their varied pit stop strategies, albeit all within the scope of a single tyre change. 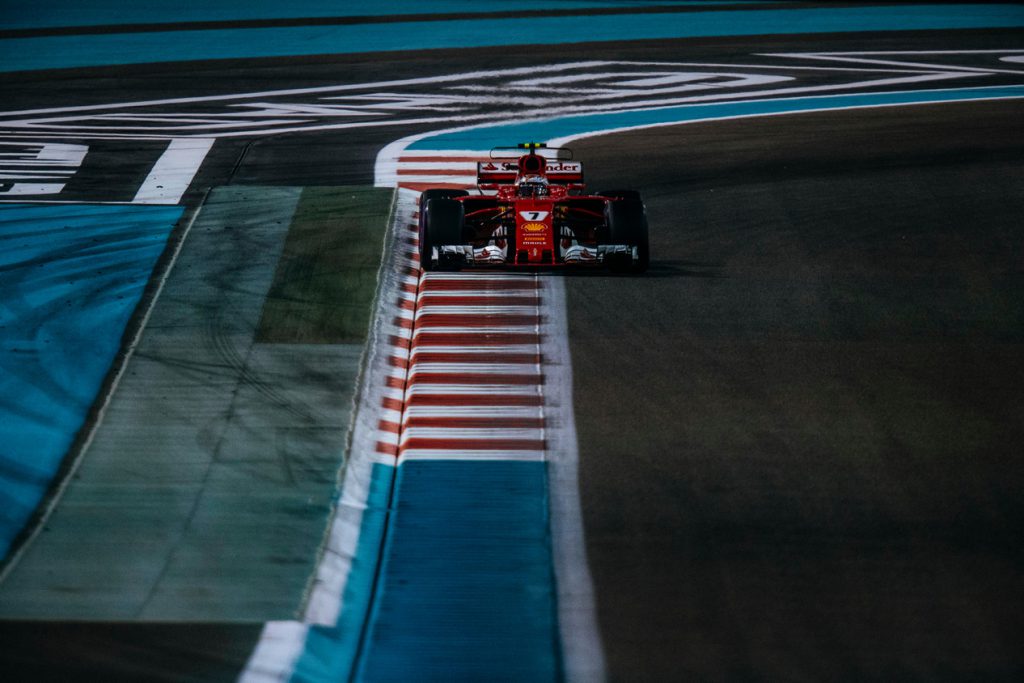 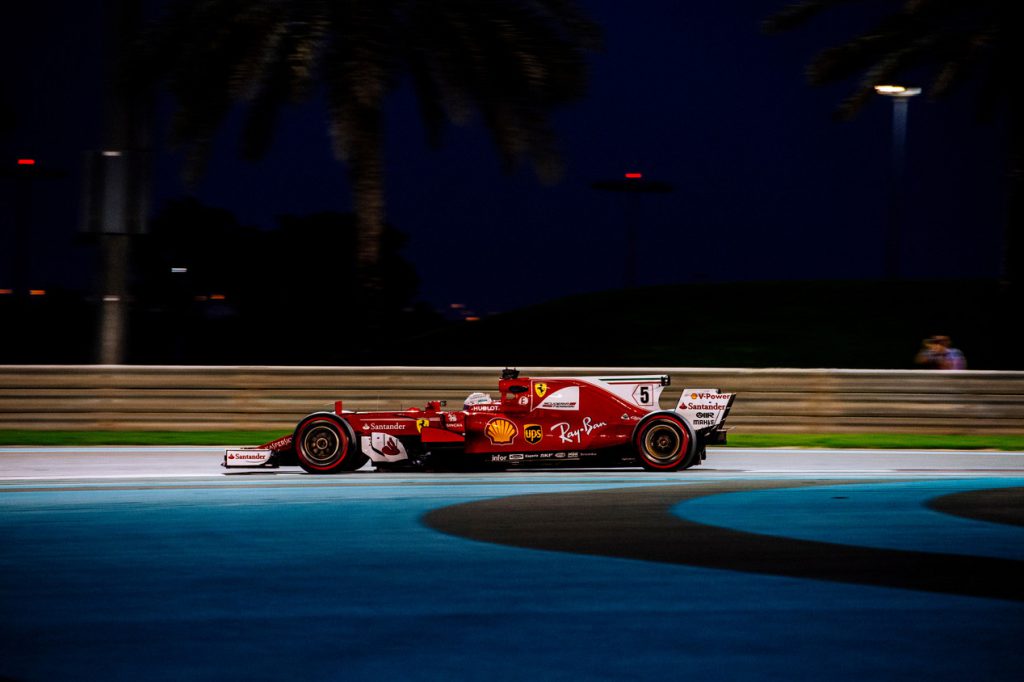 Expectations for the race were grim even by Pirelli’s own estimates. Ordinarily the tyre supplier throws an alternative strategy into its pre-race reckoning — usually a somewhat ambitious two-stop plan for a daring team — but in Abu Dhabi it was blunt in its assessment that stopping once was the only feasible way forward.

The ultrasoft and supersoft tyres — no-one considered running the soft tyre — suffered so little degradation that the data suggested the sole pit stop would come between the staggeringly wide window of laps 15 to 30 regardless of which tyre a driver started with.

Track layout not conducive to overtaking 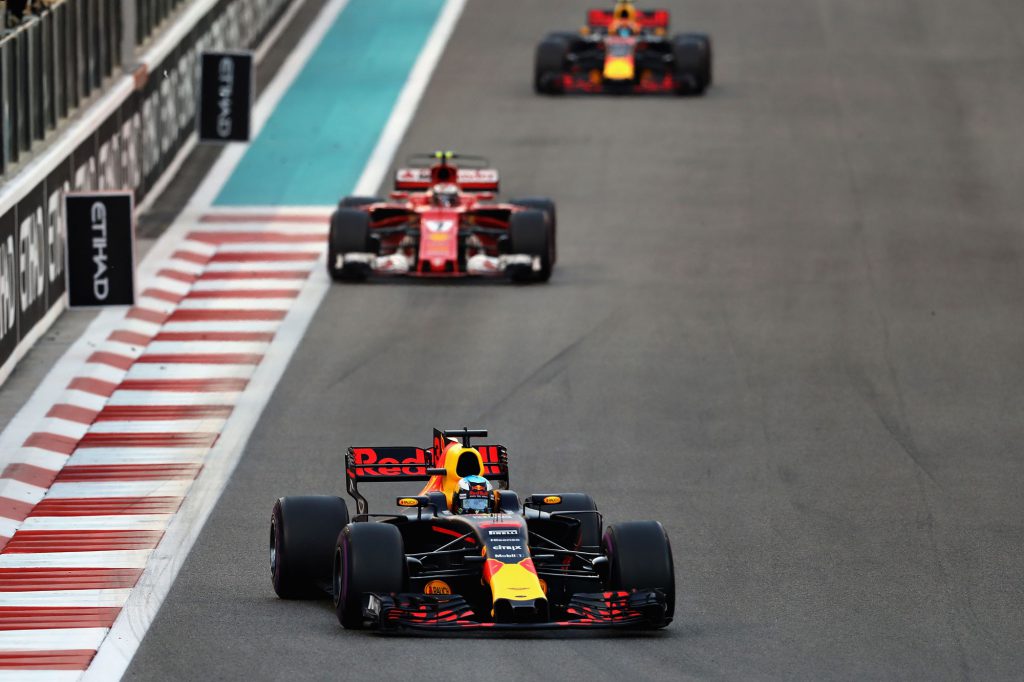 Yas Marina should’ve been a Ferrari track, but the Scuderia was unable to keep up with Mercedes. This was partly down to Hamilton having a fresh engine from his Brazil qualifying crash, which pushed him and teammate Valtteri Bottas further up the road, and partly down to Ferrari playing a conservative game to ensure Sebastian Vettel finished the race. Had he not, Bottas’s win would’ve been enough to have the Finn leapfrog the German into second place in the title standings.

But even if Ferrari had tried to battle with Mercedes, overtaking would’ve been difficult. Lewis Hamilton remarked that the last sector in particular, with its glut of slow and off-camber 90-degree turns, works to split up the cars before they reach the front straight, and chicanes before the two DRS-enabled straights do likewise, making Yas Marina particularly unsuitable for Formula One racing.

Track designer Hermann Tilke told Sky Sports F1 after the race that he and the circuit owner were considering making a “small change” to one corner with a view to aiding overtaking. 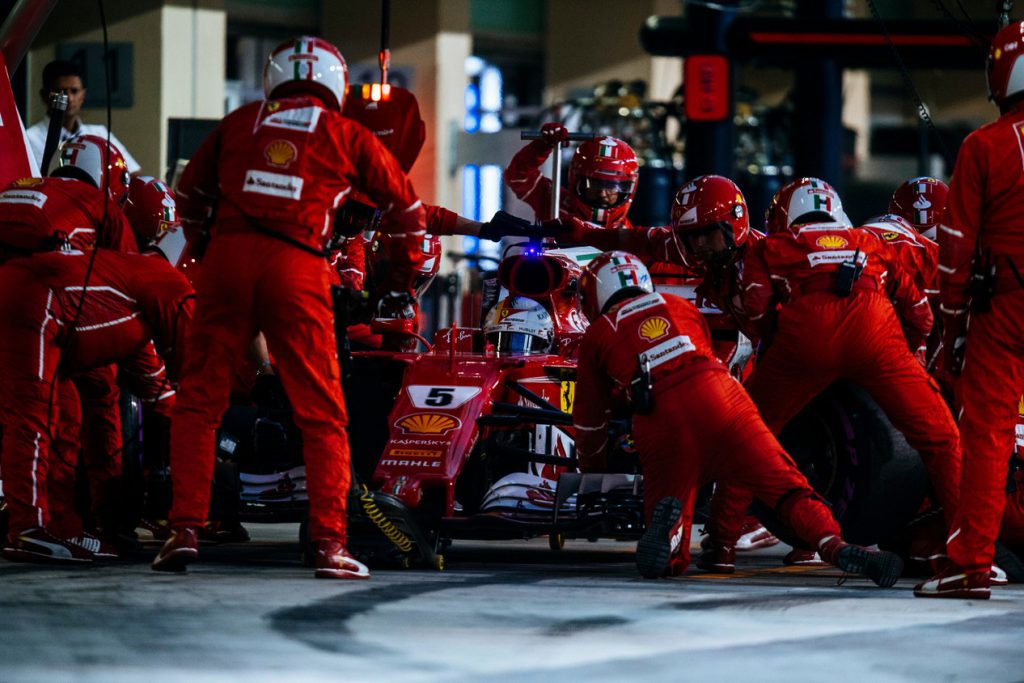 Low tyre wear and similar performance between the two compounds meant that the undercut was of limited use in Abu Dhabi. Max Verstappen attempted to undercut Kimi Räikkönen on lap 14 and Sebastian Vettel tried likewise on Valtteri Bottas on lap 20, but neither driver was successful.

Fernando Alonso tried to undercut Felipe Massa for ninth on lap 21, and though the Spaniard was initially unsuccessful, the Brazilian’s car ran out of electrical energy on his out-lap, opening the door to Fernando to make the pass. 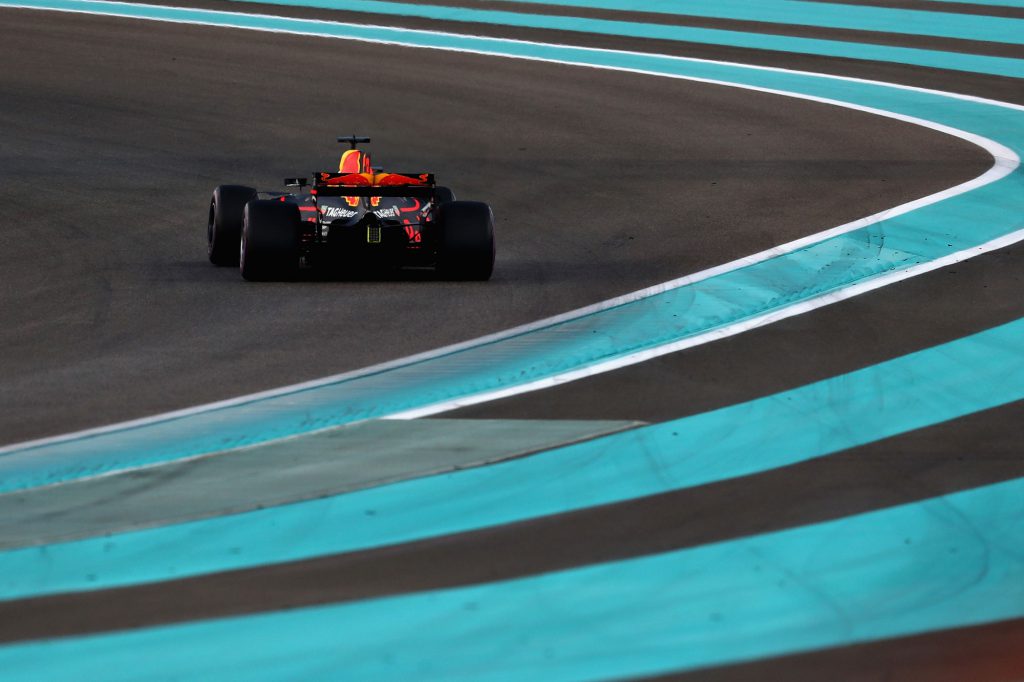 Romain Grosjean and Lance Stroll provided most of the race’s action in the first stint as they scrapped for 13th. The Frenchman made the pass on lap 11, which sent Stroll into the pits.

Recovering from P16 on the grid, Grosjean stayed out for a long stint. The strategy itself wouldn’t have been enough to overcome cars of a similar pace, but avoiding the more conventional pit stop window allowed him to build a gap over the slower backmarkers and lose fewer positions when his stop came on lap 32.

Haas teammate Kevin Magnussen and McLaren’s Stoffel Vandoorne did the inverse, stopping early on laps 22 and 12 respectively. Both cars had enough pace to cruise up behind the backmarking Sauber and Toro Rosso cars, which dropped behind the faster cars when they took their sole stops.

The curious battle for sixth

Though the headline titles had long been done and dusted, sixth place in the constructors standings was still up for grabs for Toro Rosso, seventh-placed Renault and eighth-placed Haas. The difference between sixth and eighth is estimated to be worth $12 million in prize money.

Renault had the fastest car of the three teams but trailed Toro Rosso by four points. Haas was a further two points back, but neither the American nor the Italian teams looked capable of scoring points in Abu Dhabi.

Toro Rosso in particular performed poorly, with both drivers knocked out in Q1. It escaped few that team principal Franz Tost and Renault boss Cyril Abiteboul two weeks earlier engaged in a monumental war of words that climaxed with Tost accusing his counterpart of sabotaging his engines. Red Bull motorsport advisor Helmut Marko de-escalated the tension, but the quiet question of Toro Rosso’s surprising underperformance lingered throughout the weekend.

It was therefore up to Renault to score the requisite points, and when Carlos Sainz retired from the race with a loose front-left wheel, Nico Hülkenberg bore the burden of holding the sixth place he inherited from Daniel Ricciardo’s lap-19 retirement.

The German delivered the goods, but the result wasn’t without controversy.

Sergio Perez had jumped Hülkenberg on the first lap, but Nico, thinking the Mexican was about force him off the track, took to the run-off area and rejoined the track ahead of his rival.

The Renault driver refused to hand back the position, forcing the stewards to issue him a five-second penalty, but by then Perez had fallen six seconds behind, effectively rendering the penalty pointless.

“It’s a track position race here,” Force India chief operating officer Otmar Szafnauer told Sky Sports F1. “We knew they were a bit quicker than us at the beginning on the ultrasoft, which is why we needed to get ahead and stay ahead.

“Hülkenberg cuts a corner, the FIA didn’t do anything about it and guess what? They gain a position in the constructors championship, which means more money and more competitiveness next year.”

It’s a situation sure to prompt questions of the way illegal overtakes are dealt with, but in Abu Dhabi Renault’s strategy to take a risk on copping a penalty paid off — and paid off big time. 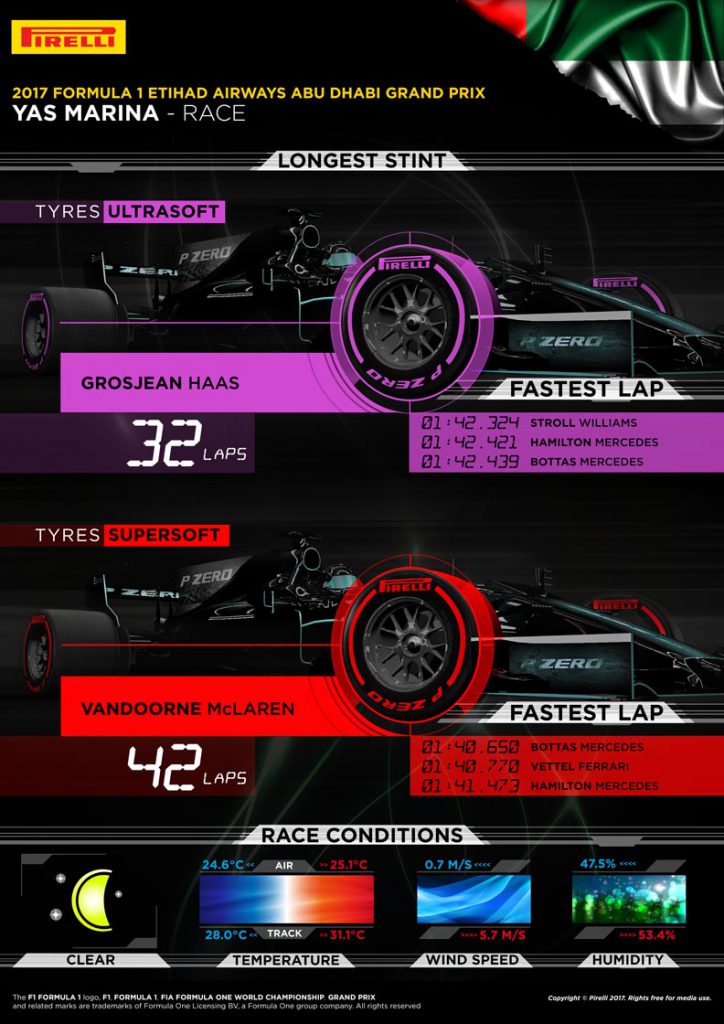 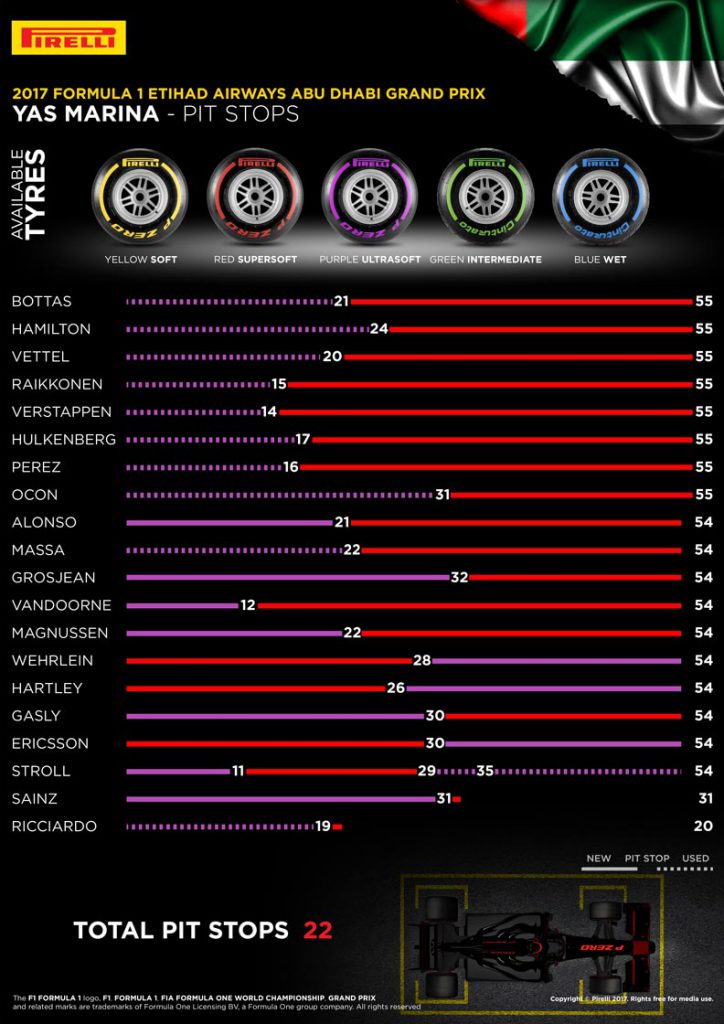 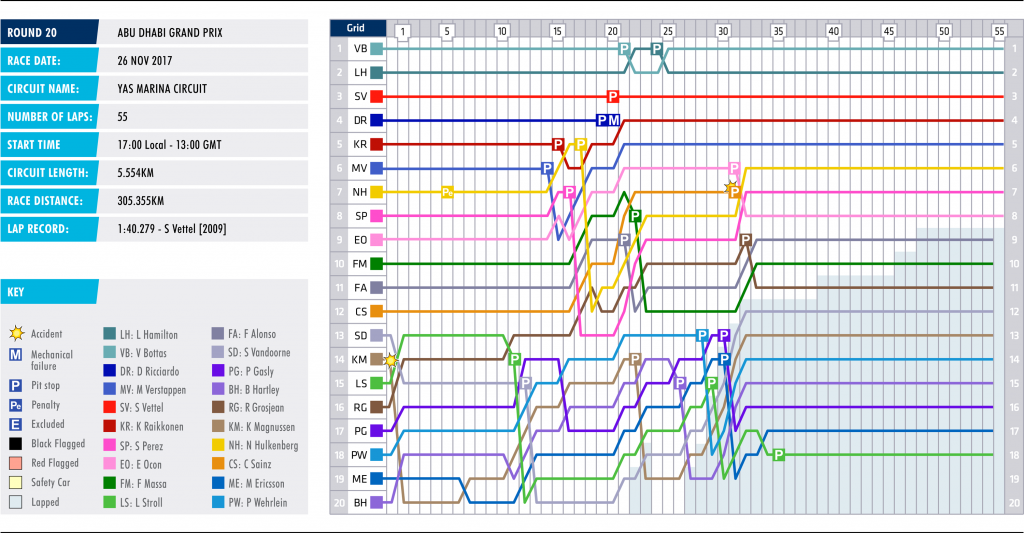