The 2016 Brazilian Grand Prix will be one of those races we’ll all remember for many years to come. Lewis Hamilton took victory in the heavily disrupted race, which took place in wet conditions and included several safety car periods and red flags.

The chaotic and action-packed Brazilian GP saw Nico Rosberg finish in second place, meaning the title fight between the Mercedes duo will go down to the 2016 finale in Abu Dhabi. But all eyes were on Max Verstappen as he swept up the order to third.

But with wet weather came limited strategy, especially with the red flags meaning cars could change tyres if needed. Nevertheless, we’ve picked out the major strategy headlines to emerge from the Brazilian GP as there’s still plenty to be discussed.

The weather at Interlagos is notoriously difficult and there were several moments where it looked like things would dry out enough for some quicker and more trouble-free running. This tempted several drivers to go onto intermediates, with some gambling in the early stages after the safety car start.

But the rain never really went away and remained quite constant throughout, which meant the inters proved to be the wrong tyre to be on throughout the race. Many did go for inters in that early period, before ending up changing back to the wet compound later on.

Lewis Hamilton became the first driver since Alain Prost at the 1993 German Grand Prix to win a F1 race without making a proper pit stop. Technically he did change tyres twice during the red flags, going for a new set of wets first and then a used set afterwards, but a proper pit stop was never completed by the Mercedes crew on Hamilton’s car.

One of the main interesting strategic points from the race was the tension and vibe at Mercedes, Hamilton and Rosberg both didn’t want to stop for wets and lose track position, in case of a safety car or red flag – or to lose out to one another.

With the title fight being so close and the stakes being so high, each driver seemed a little wary of what was going on. Pitting could mean being stuck behind the other or losing ground and especially for Hamilton, that would’ve had an impact on the championship. In the end though, both managed to change tyres during the red flags. 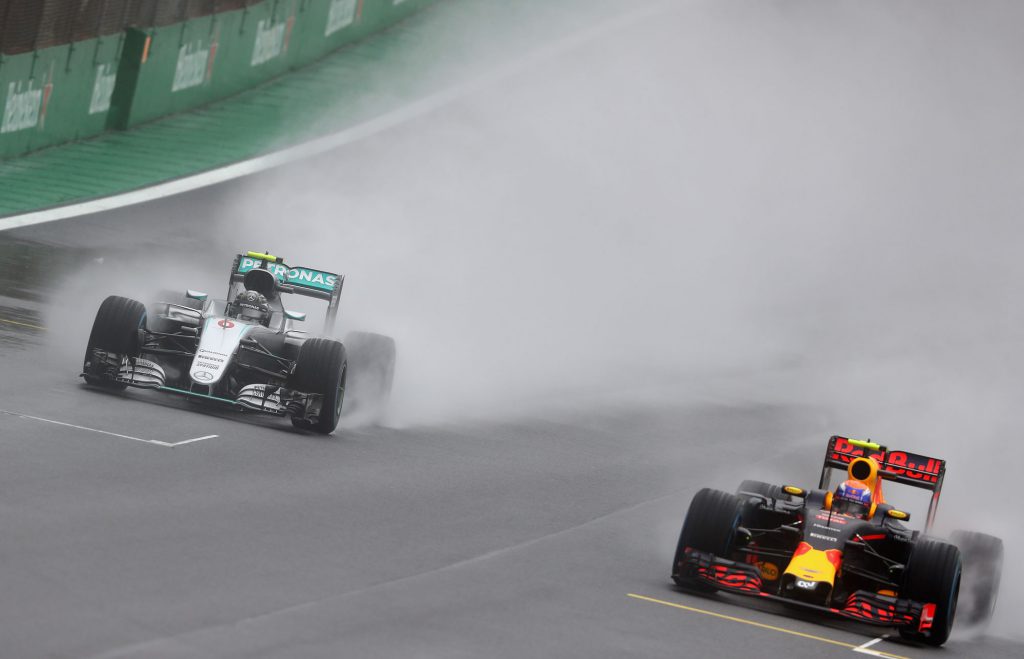 There were quite a few incidents during the race, as you’d expect from the heavy rain and tricky conditions. Romain Grosjean binned his Haas on his way to the grid and didn’t even make the start, while Marcus Ericsson then crashed towards the end of the lap after 14 laps and deployed the safety car.

Kimi Raikkonen smashed his Ferrari on the pit straight, which ended up bringing out the first red flag on lap 20. These incidents and crashes proved to be quite important in the race outcome and the flow of the race too, making it especially stop-start.

Undoubtedly, Verstappen excelled in the wet conditions and he proved to be quick from the start. He was as high as second at one point in the race and was one of the drivers to pit for intermediates after Ericsson’s crash, ending up going back onto the wets.

Red Bull opted to pit Verstappen for inters once again on lap 43, going for the gamble. It failed and the subsequent pit stop to go back to wets dropped him well outside the top 10 – as low as 15th. But the feisty and phenomenal way he moved his way back up the grid was truly incredible and will surely be talked about for years.

The pit stop proved to be a mistake and lost him a huge amount of track position. His new wet tyres gave him an advantage but he certainly looked quick all the way through the race, particularly on the wets. You have to think a win could’ve been possible in those conditions after such a fightback.

Jenson Button is usually brilliant in wet conditions but the two switches he made to inters backfired and he ended up finishing last of those who made the chequered flag. There was simply too much water and too quickly a changing environment on track for the inters and this proved to be costly for track position and the end result.

It wasn’t particularly surprising but the wet tyre held up decently in the conditions, especially in terms of the life of the tyre. Drivers weren’t happy with how they performed in terms of getting rid of the water, especially with the amount of aquaplaning going on.

But in general the wets did last quite a while without too much wear or degradation, with the longest stints on it being 43 laps (for Hamilton, Rosberg, Sergio Perez, Felipe Nasr and others). The inters held up quite well too, with Bottas going for the longest stint (33 laps). It’s a shame they didn’t quite work as well as the wets too…. 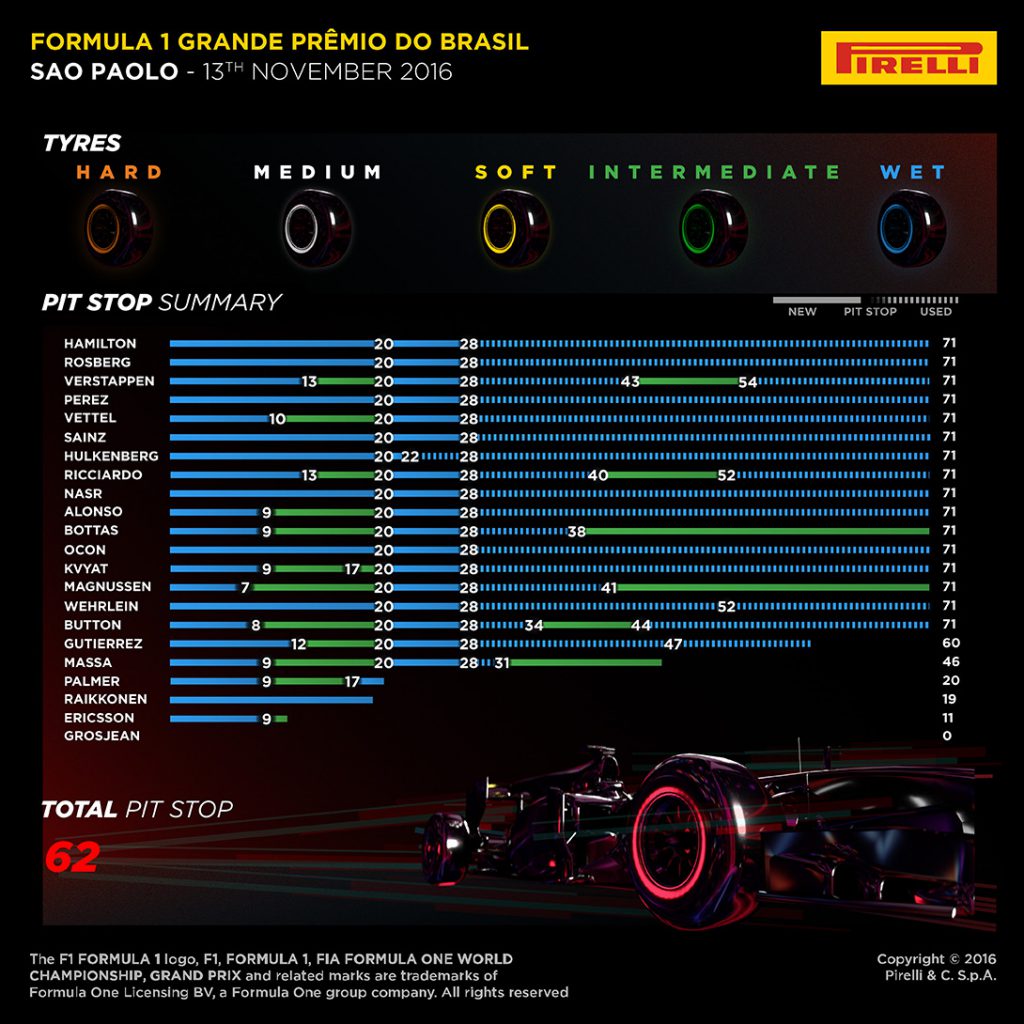 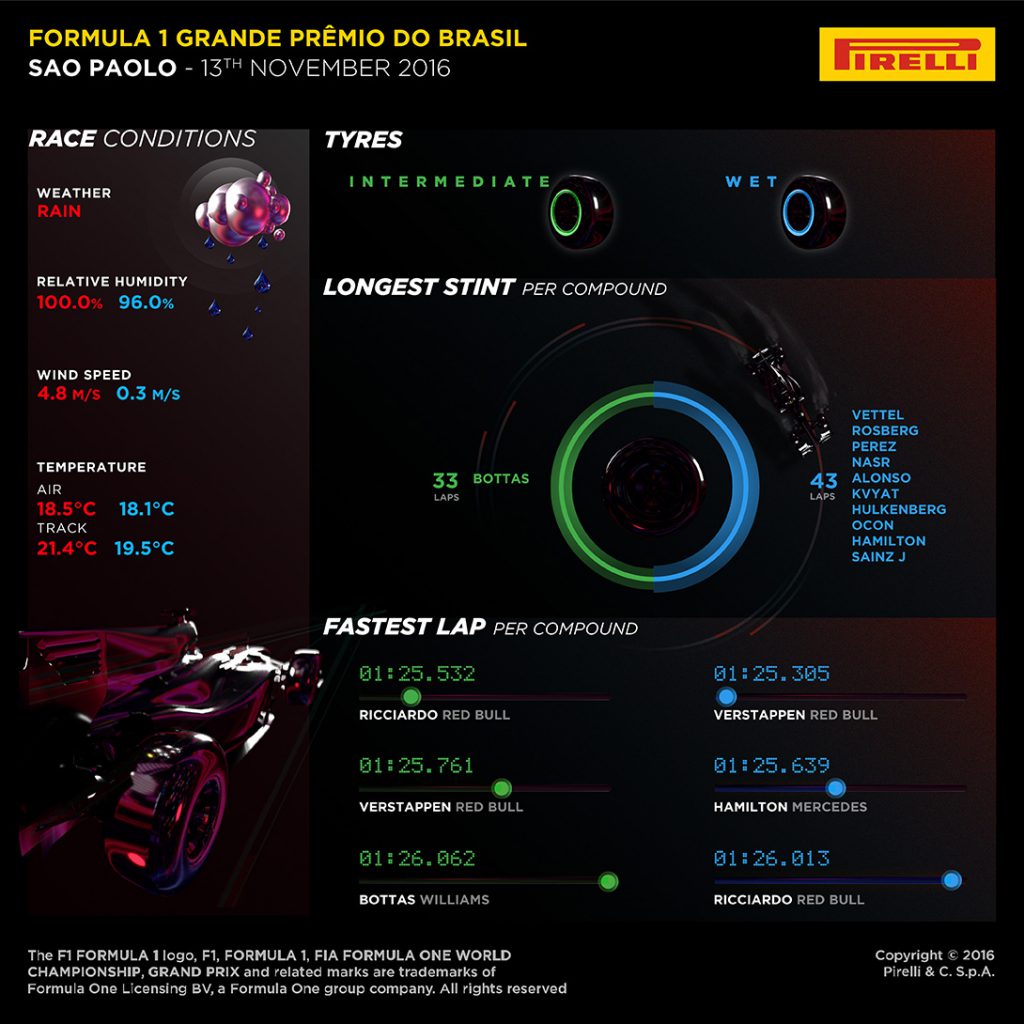 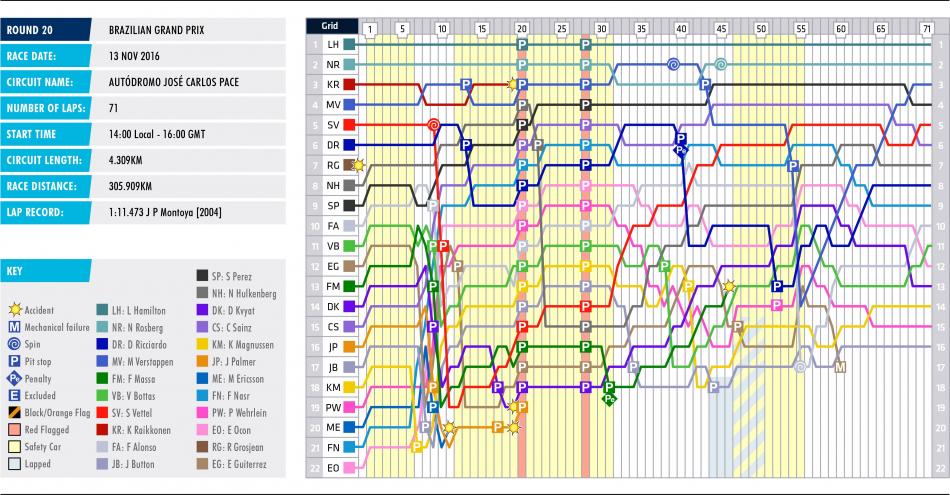