The Autodromo Hermanos Rodriguez hosted an unusual and intriguing Mexican Grand Prix, which started and ended with high drama. Lewis Hamilton claimed victory to cut the gap to team-mate Nico Rosberg to 19 points in the title fight.

Behind, there were some feisty battles, with three drivers being classified third at some point over Sunday afternoon and evening due to numerous penalties. Once all the dust had settled, it was Daniel Ricciardo completing the top three.

It wasn’t a particularly outstanding race in terms of strategy, but there were some fascinating points to take away from the race. Here are the major strategy headlines to emerge from the Mexican GP weekend

After the first corner mayhem and incidents, the safety car was quickly dispatched. Several drivers opted to dive into the pit lane straight away, most notably Ricciardo’s Red Bull. He went from super-softs to mediums, going for an aggressive two-stop strategy.

He did a long 49-lap stint on the medium tyre, going through traffic pretty quickly before going onto the soft tyre with 21 laps remaining. This gave him a nice, comfortably achievable final stint on the soft Pirelli compound, which enabled him to close in on the battling Max Verstappen and Sebastian Vettel.

Red Bull looked strong throughout the race, although – like Ferrari – not quite on Mercedes’ pace. This meant Ricciardo was able to move into podium contention and despite finishing fifth on the road, he ended up getting the trophy for P3 anyway.

Vettel does his own thing

Vettel once again did his own strategy, staying out longer on the softs even when his Ferrari pit crew were ready for him. He did a remarkably long opening soft-tyre stint, which was all thanks to being able to make it through to Q2 on the mid-range compound.

He missed getting the longest soft-tyre stint of the race by two laps, pitting after 32 to go onto the medium. The soft as a whole held up well and Vettel was matching those behind him even with his older Pirelli rubber, which is probably why he opted to stay out a couple of laps after being originally called in.

It put him in better shape for the final, intense battles with the Red Bull duo but ultimately his aggression caught up to him, as he was penalised for moving in the braking zone on Ricciardo (ironically, something he’d complained about with Verstappen in previous races). 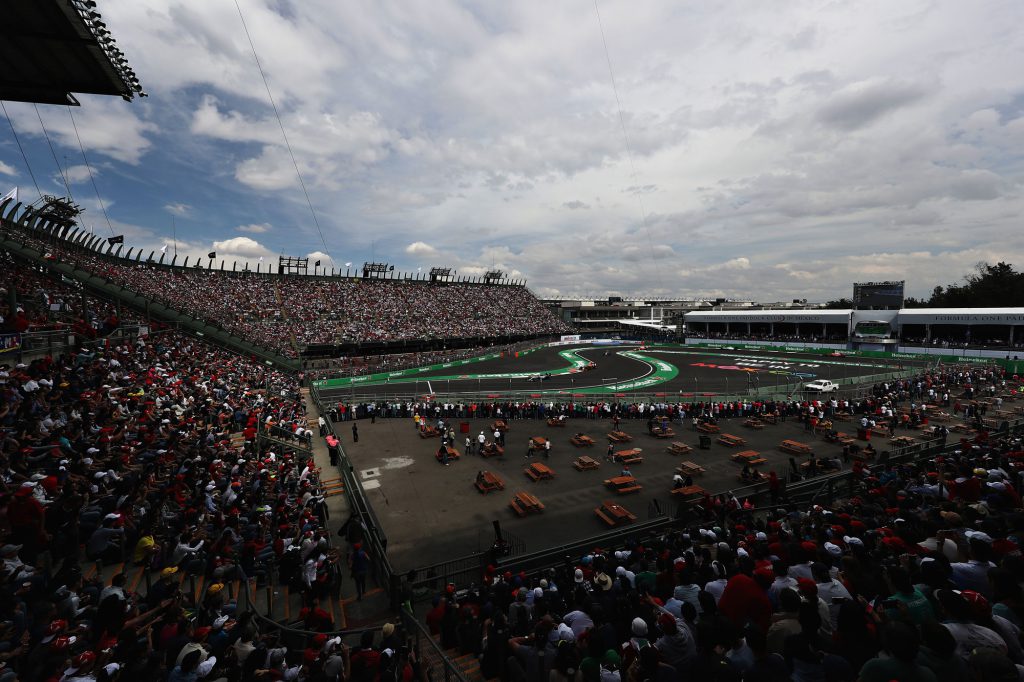 Sergio Perez had hoped to get a better result in front of his home crowd, having qualified a disappointing 12th. But getting stuck behind both Williams drivers meant he couldn’t make the most of being light on his tyres. First, a good start got him caught up behind Valtteri Bottas.

He struggled to get passed the Finnish driver but having moved onto the mediums, he then got stuck behind Felipe Massa. He got ahead of him once, but overcooked it into Turn 1 and fell back behind. The equal top speed and not-as-effective DRS meant he failed to find a way through and settled for 10th.

The two Mercedes drivers started on the softs, while the Red Bulls went for the super-softs, having used them in Q2. It appears Red Bull tried to undercut Rosberg, the second Silver Arrows on the road, with Ricciardo’s alternative strategy and Verstappen’s earlier stop.

Ricciardo ended up two-stopping with a late soft tyre stint to close in on Verstappen and Vettel. Verstappen pitted for mediums on lap 12 and made it all the way to the end, but Rosberg’s later stop meant he was able to make it to the end without as much degradation and tyre wear, while Verstappen was struggling towards the end.

Obviously, the result at the chequered flag changed drastically after the race. Verstappen was third but then was given a five-second time penalty for gaining time by cutting the first chicane while battling Vettel. This dropped him to fifth.

There was a horribly awkward moment in the pre-podium room where Verstappen finds that out and has to leave, with Vettel running to make the podium on time. But later in the evening Vettel was given a 10-second penalty for moving under braking while scrapping Ricciardo, dropping him to fifth. Ricciardo was promoted to third (securing P3 in the drivers’ standings) and Verstappen moved back up to third.

It’s also worth mentioning the mega jobs Marcus Ericsson and Jolyon Palmer did, stopping on lap one and going all the way to the end on medium tyres. The Sauber’s drive was particularly impressive, as he finished 11th after being crashed into by Pascal Wehrlein on lap one.

He ditched his softs on lap one, while pitting for repairs, and made his mediums last a staggering 69 laps. Palmer also stopped on lap one after the safety car was deployed and matched that stint number, finishing 14th after starting last. Both showed good pace even in the final laps. 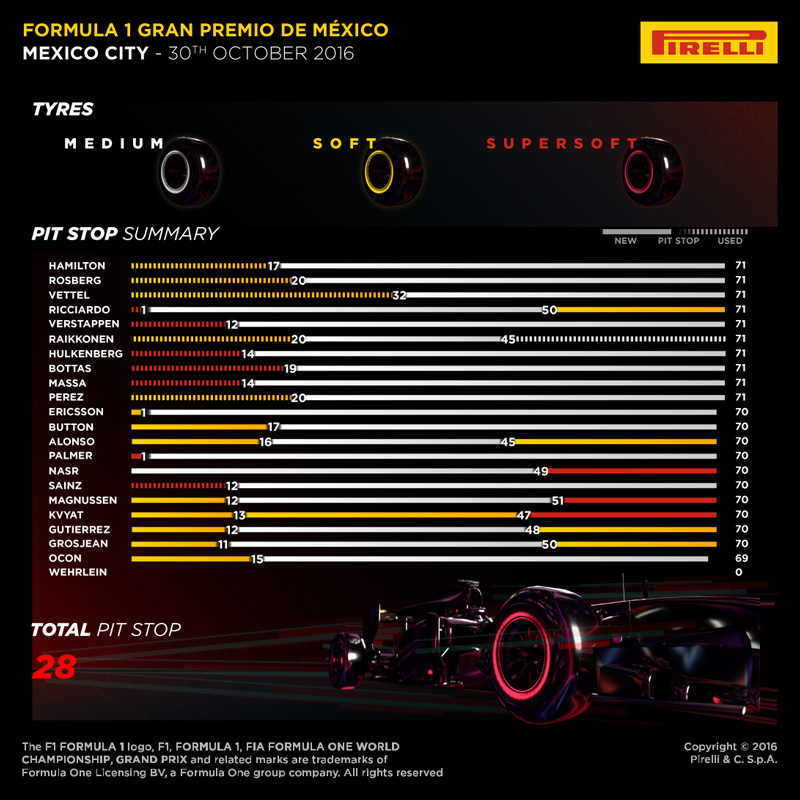 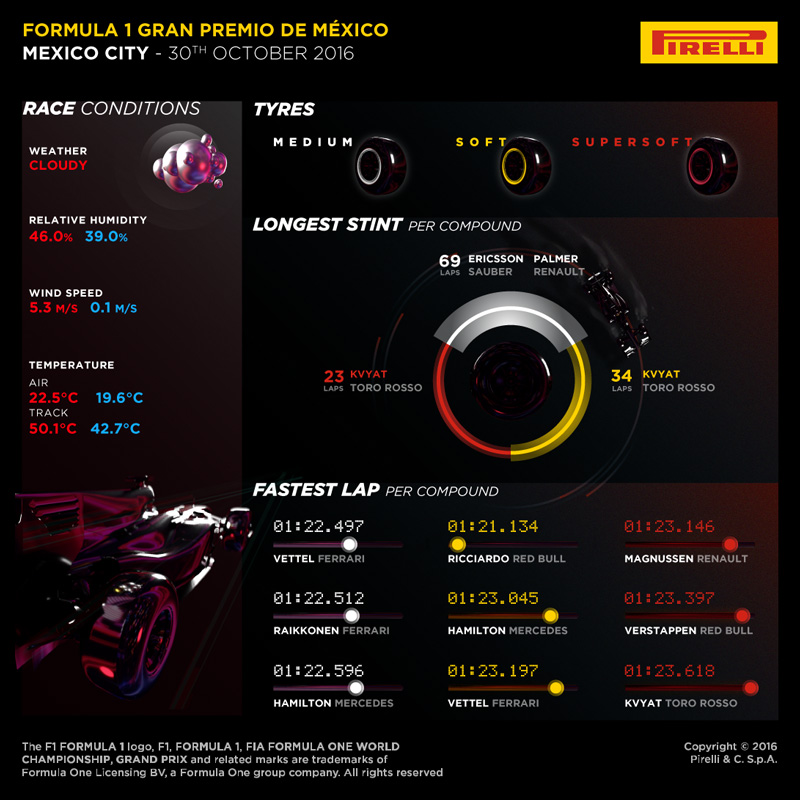 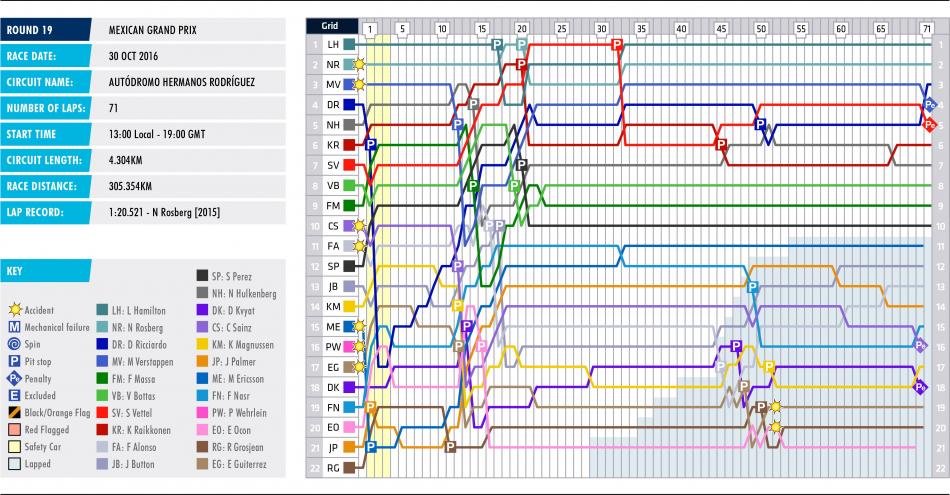