Formula 1 returned to the historic Silverstone circuit for the British Grand Prix, with Lewis Hamilton dominating to claim his fourth victory at the track and of the 2016 season so far. There was controversy in the fight for second, with Nico Rosberg being demoted to third behind Max Verstappen after a penalty for breaching radio rules.

Drying conditions after early rain shook up the British GP strategy, but the evolving track environment and deployment of the Virtual Safety Car played a crucial role in deciding the final finishing positions. Here are the major strategy stories to hit the headlines at Silverstone.

Starting behind the safety car

The wet weather Pirelli tyre has gone through several improvements over the years, so it was frustrating to see the British GP start behind the safety car after an earlier rain shower on the grid. With the sun out and warm conditions, Silverstone gradually dried out but had to wait until the end of lap five for the race to properly begin.

We’ve seen this caution from the FIA before. Drivers complained of aquaplaning in the opening one or two laps but by lap three or four, conditions seemed to be ready to race. In fact, several drivers dived into the pitlane as soon as the safety car went in to change onto the intermediate tyres.

One of the best elements in terms of strategy in a wet-to-dry race is the element of unknown. Drivers each have different comfort levels on a drying track and feel the conditions differently. It’s fascinating to see the change to a drier tyre play out and is always one of the most interesting strategy features in these races.

Some opted to make a move right as the safety car retreated to the pits while others opted to stay out one lap, or even more. Those who stayed out on the intermediates benefitted from the deployment of the Virtual Safety Car for Pascal Wehrlein’s stranded Manor, while the change to dry tyres later on was treacherous – off the racing line, conditions were still tricky and we saw plenty of spins and incidents because of this.

The deployment of the VSC was a big boost for Hamilton, Rosberg, Verstappen, Sergio Perez and Felipe Nasr, who all gained time and were elevated positions due to the decrease in the differing speeds of the cars on track compared to those in the pits. It hit Daniel Ricciardo hard in his fight for a podium, Nico Hulkenberg lost time too alongside several others.

After qualifying Pirelli shared in their post-race press release a set of lap number guides for each tyre, if things were to remain dry. Silverstone is a tough track for the tyres and with problems there in the past, as well as fairly high tyre degradation in practice, it was clear they wanted to give an estimate of what each tyre was capable of. It wasn’t necessarily a ‘you can’t do any more laps than this’ statement but more a piece of advice.

The wet start meant most of this information wasn’t really necessary but typically the teams still did more laps than advised, especially the medium compound. Felipe Massa did the most laps on the soft tyre with 13, below Pirelli’s guide, but a whole host of drivers did over 30 laps on the medium.

As expected, the medium tyre was the preferred race tyre, with strong performance while still holding up well on long stints. It also had good performance in the slippery conditions, warming up fairly quickly and not producing too much degradation or wear. This is why we saw so many drivers go right to the end on the white-marked tyre after switching from the intermediates.

Of course, a few drivers struggled out there with tyre degradation, particularly the Williams drivers. The car lacks downforce and that’s not something you want at Silverstone. Massa had to stop again for a set of softs, while Fernando Alonso and Kevin Magnussen also had to pit for a third time.

Well, Hamilton was. The three-time world champion looked in a league of his own all race, he excels in wet weather (we saw this at Silverstone in 2008) and is obviously just as quick in the dry. His superiority in the wet looked even greater in the early laps before the switch to intermediates, where he scampered off into the distance as team-mate Rosberg struggled.

Rosberg hasn’t typically gone well in the wet while driving for Mercedes, perhaps due to a characteristic in the car, set-up or he just doesn’t feel as confident in those conditions. While Hamilton was well clear out front, Rosberg had to fend off Verstappen and he ended up finishing ahead of him, only to be demoted by the radio penalty. Red Bull were best of the rest, the Silverstone track clearly suiting the RB12.

But the gap to Rosberg behind did mean Mercedes were able to double-stack their cars in the pitstops, which really helped them maximise the strategy and the conditions. They even snatched the quickest stop award away from Williams, breaking the team’s nine-race run!

What if it had been dry?

It’s always interesting to think what could’ve happened if the race had been dry throughout. The predicted quickest strategy was a two-stop with two soft tyre stints and one on the mediums, but a dry race would’ve opened up more strategy options and we could’ve seen a very different race outcome. It was quite warm on Sunday and the higher temperatures would have likely produced higher tyre wear and a few more three-stop races. 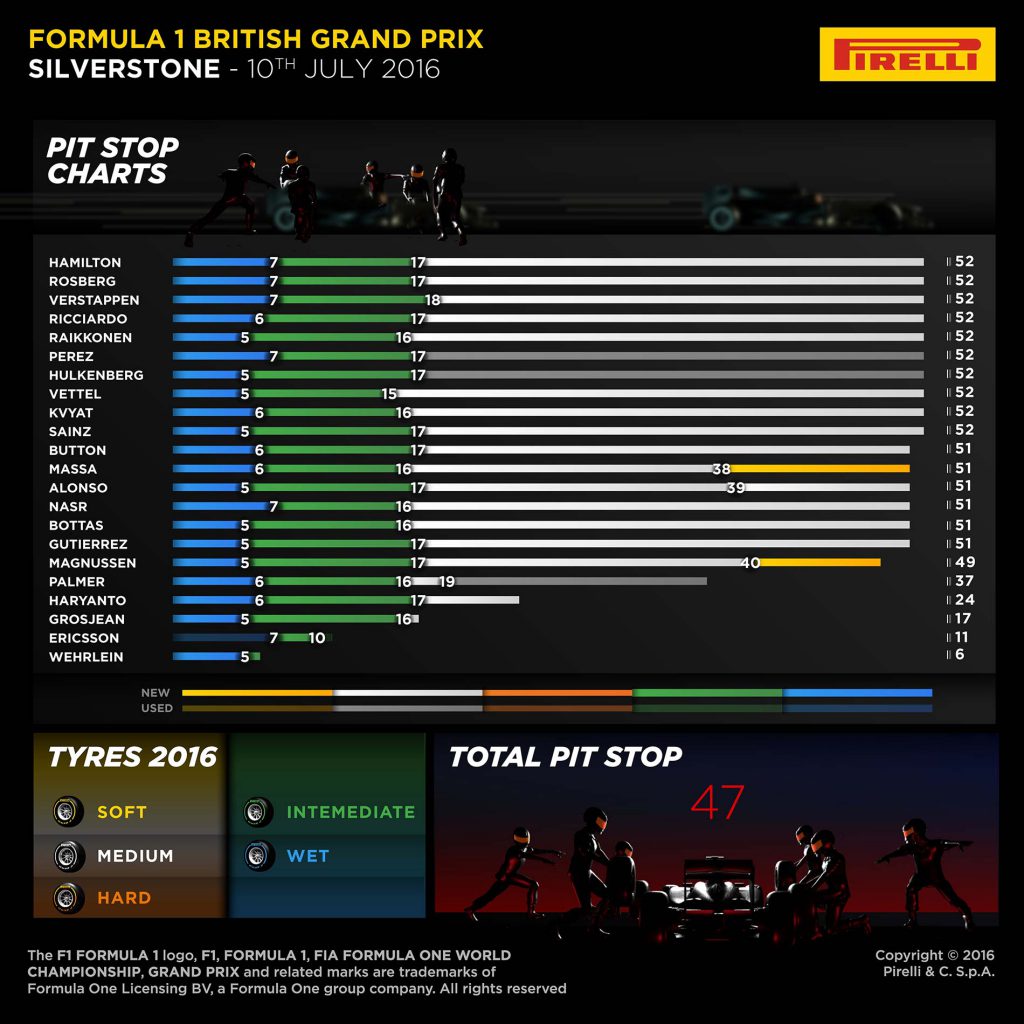 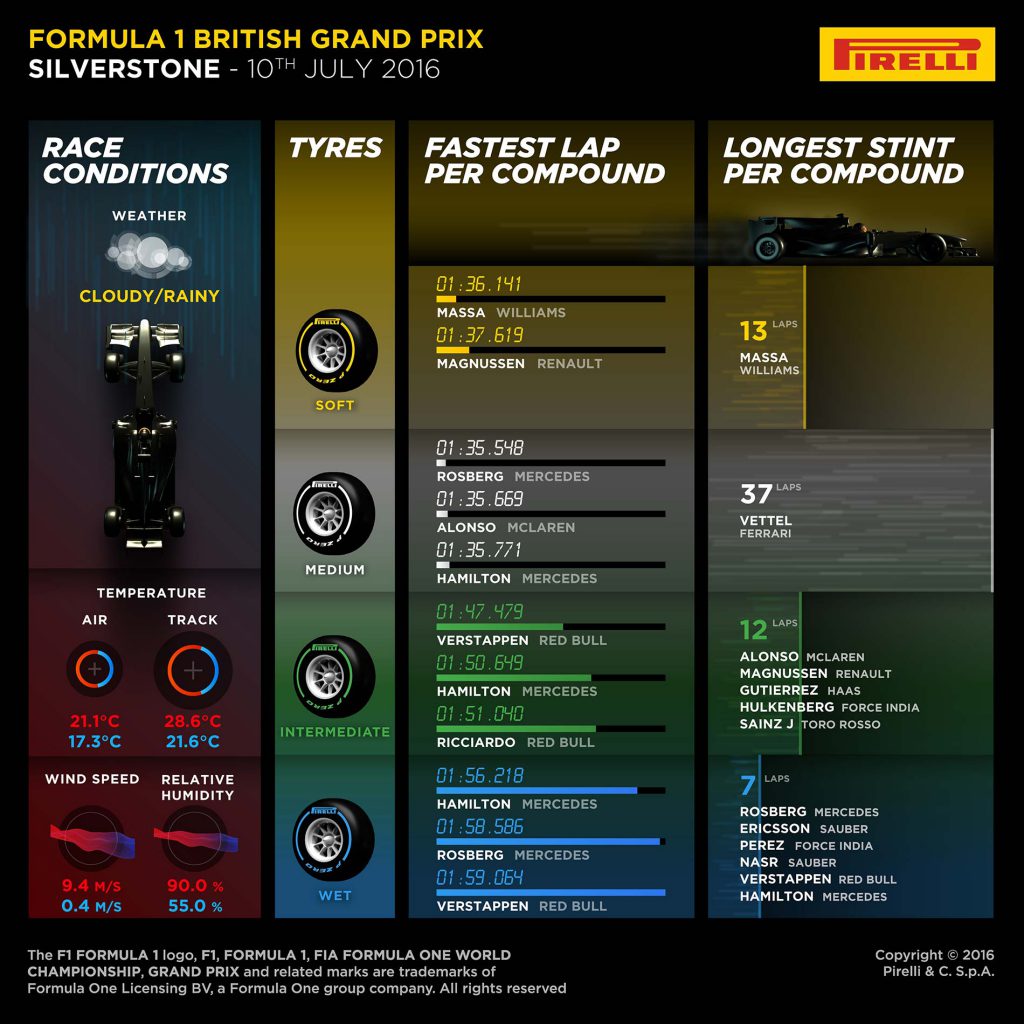 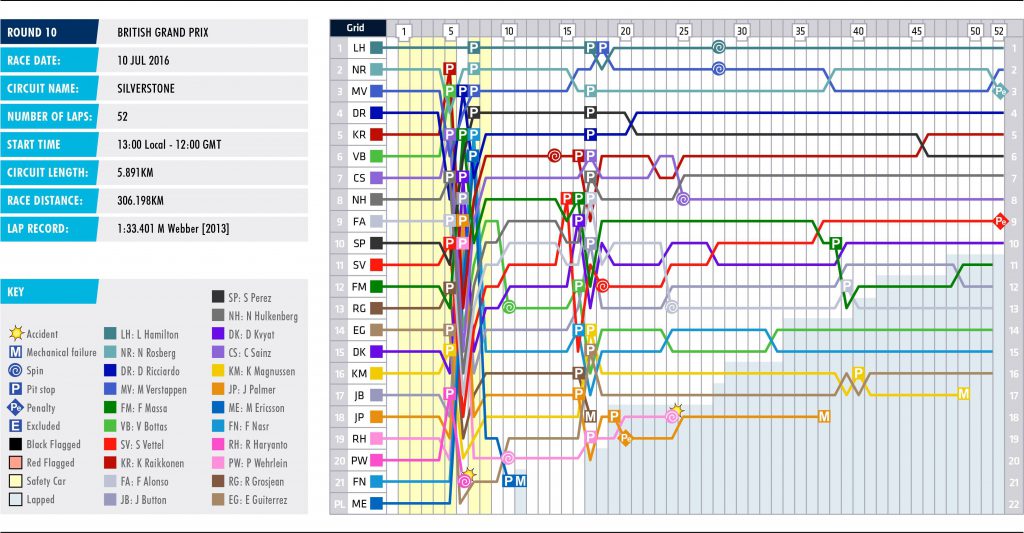